Music is, oddly enough, an incredibly important part of the shows, or at least it is for me. I say that it’s odd because, well, these are shows about libraries, technology, cyberpunk, Generation X, and librarians in space. Sure, lots of podcast have music breaks or a musical intro or outro. But for me, the music is just as important as the subject matter. I’ll go through dozens of songs, making notes, trying to find ones for the show I’m working on or a show that I have in the pipeline. All for some twenty to thirty second bumpers between sections and maybe a little something for the episode’s conclusion. 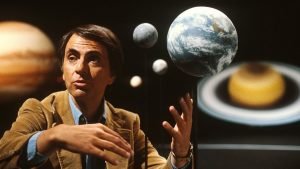 This guy changed my life…

I remember becoming fully aware of music as a thing when I was five years old. I was sitting on the floor of my parents house watching PBS. Not because I was a precocious, bright little child who showed an early love of learning. No, I just knew that if I watched PBS long enough, then I would get to see Muppets. That’s it. I had no concept of channel schedules, or that certain shows came on a certain times. PBS showed Muppets on the regular, so I’m watching PBS… can’t miss the Muppets. And one night, another show came on. There were no Muppets, not a single one. 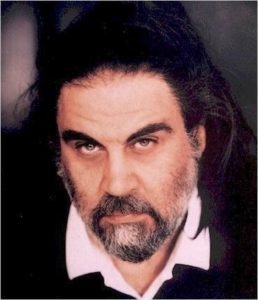 But not as much as this guy changed my life.

But there was space, and spaceships. There were stars. There was a guy who invoked a groove like a scientific Mr. Rogers. And there was music. Fantastic, wonderful music like I’d never heard before. The show was an episode in the award winning documentary series, Cosmos. It was hosted by Carl Sagan and featured the music of Vangelis.

Decades later, I compose, record, and listen to a lot of space music.

I include a lot of it in the show which also features downtempo, chill-out, chiptunes, and the occasional composition by me. A while back a listener wrote in asking if I had my own music available somewhere for listening and downloading, or if I had a catalogue of the music I’ve used on the podcasts. At the time, I didn’t.

But I do now. I’ve compiled a selection of tracks that I’ve recorded over the years, along with all of the albums I’ve recorded. I’m warning you, some of these sound rough, man. Because the earlier stuff involved me trying to figure out how to plug a Yamaha keyboard into a computer and trick both the computer and the keyboard into recording multi-track audio.

And then there’s the list of music that’s appeared on every episode of every podcast. I’ve even alphabetized it because, you know, I’m a librarian or something. Alphabetizing lists is something librarians do.

A podcast about The Legend of Calamity Jane

A multifaceted journey through time